The newest threat to innovation in the U.S. is the increasingly local technology regulations.  Small start-ups are increasingly have to work with dozens (and often hundreds) of regulators — and that means they will have to raise much more capital and slow their offerings to market.

It is now the fashion for individual states (and often counties and cities) to each institute their own and wildly different types of regulation on technology companies. The immense technology giants have the resources to deal with regulatory minutiae (in fact, they welcome the complex regulations because it further entrenches their power).

It is not regulation, per se, that hurts innovation.  It is competing (and often contradictory regulation) that impedes regulation.

Historically, most technology has traditionally been regulated at a federal level.

But many markets outside of technology (from auto sales to car insurance) have been regulated by states … and some even by cities (think of zoning laws, rent controls, sales tax, and more).

For instance, markets like insurance have traditionally been regulated at the state level; those 50 insurance regulators make innovation very difficult because firms essentially have to create 50 different products — one for each state. In addition, insurance firms have to spend a large part of their time lobbying legislatures and worrying about upcoming elections that could be a systemic risk to their business. The productivity growth for insurance therefore is much lower than one would expect with software.

The same is true for cable companies, which were regulated at the city level and have to operate in thousands of different jurisdictions (some overlapping) within the U.S. This makes serving customers very difficult and is one of the reasons cable companies have had historically low customer satisfaction and low Net Promoter Scores.

Another thing that comes with regulation is corruption — especially at the state and local level.  Many cities and states have endemic corruption problems because so much is riding on creating a law that benefits one company (or industry) over another.  That type of corruption is much less likely at a federal level because the stakes are bigger and thus is much more scrutinized.

The internet is a fresh landscape where productivity growth is accelerating — partially due to the fact that most of the regulations have been federal. The tempo attracts smarter people who want to work on harder problems and not be curtailed by bureaucracy.

END_OF_DOCUMENT_TOKEN_TO_BE_REPLACED

Not all feedback is created equally.

“Constructive feedback” occurs when you give someone feedback on how to improve on the work they’ve done.

For example, if you’re taking a golf lesson and your instructor suggests you shift your weight a little to the left to improve your form, this is constructive feedback.

It’s specific, targeted, timely, and helps millions of people every day. It helps to get rid of non-productive habits in favor of productive ones.

Constructive feedback (for good reason) has been the practice of choice for many great managers, coaches, parents, friends, and leaders.

“Specific positive feedback” occurs when you explain to someone what they did well.

Most people think this type of feedback is a pat on the back and a “great job.” But it’s more than that. It’s dissecting the WHY and HOW behind someone’s good work.

Giving specific positive feedback is hard because you generally have to spend a lot of time with them or see many variations of their work to catch what they did well.

For example, you might have to watch someone take 100 golf swings before they shift their weight correctly and you can point out what a great swing they had and why (even if it was by accident).

END_OF_DOCUMENT_TOKEN_TO_BE_REPLACED

“Crazy thought experiment: Imagine a new type of company that decided to only do what it was really good at and essentially outsourced everything else.”

Because revenues of private companies tend to be secret, most venture-backed companies have historically bragged about how many employees they have.  A CEO will say: “we went from 100 to 200 employees last year” as if fast employee growth is always a good thing.

But this is changing: there is a new status game brewing between companies concerning who has the fewest number of employees, centered around who is engineering greater amounts output with less staff. Indeed, the freedom to iterate quickly is status. More resources along with lower headcount means that they can dominate new markets. This is because they are tripling down on their strengths. 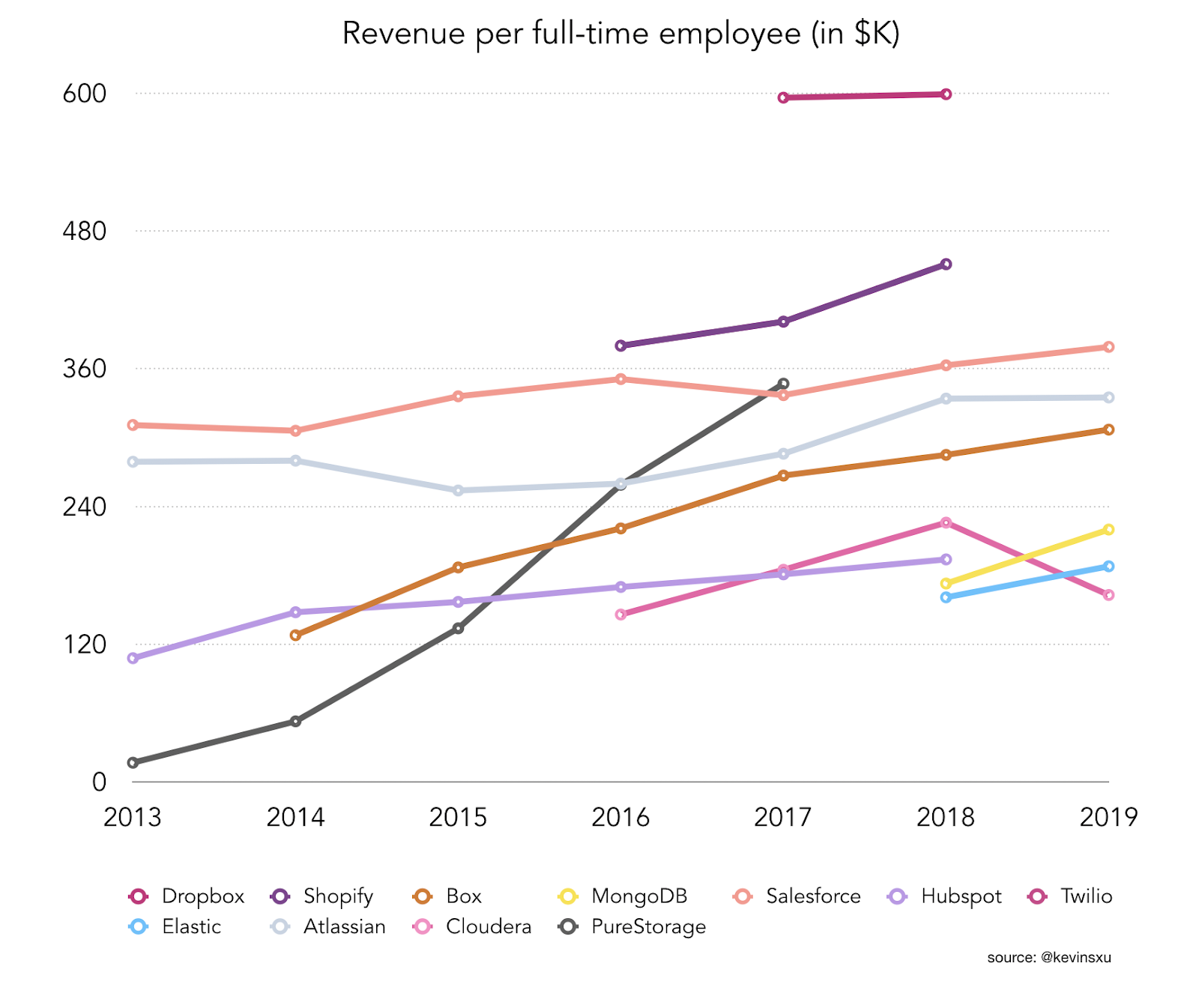 In the future, those who achieve the greatest results with the least number of employees will be admired above all others; the key statistic to look at is the go-forward net revenues per employee because it best encompasses the company’s leverage. What matters is each employee’s productivity and how the business itself can scale?

This statistic doesn’t just ring true for the technology space, rather any business should be aiming to maximize that metric. By doing so, every employee feels and acts like Warren Buffet; they’re investing their capital (time and skill) into the company. Every good CEO should be spending time trying to increase their employees’ productivity, which is the strongest form of leverage the company retains.

END_OF_DOCUMENT_TOKEN_TO_BE_REPLACED

Over at SafeGraph, I write about why “Exit Transparency” is so important for companies and employees.

Since publishing yesterday, I got a ton of inbound from other CEOs and founders talking about what they do and also asking about how we do things at SafeGraph. We still have a ways to go at SafeGraph to be great at Exit Transparency (it is very aspirational) but we have made a lot of strides to be better at it.

Exit Transparency is about starting employment with the end in mind. When the employee eventually leaves the company (as all employees eventually do), what do they want to achieve and how to they want to grow.